The Guardian newspaper includes a series of called Other Lives.  As they describe it: “obituaries pages traditionally describe and celebrate the lives of the great and good, the famous and infamous. There is another type of life that deserves noticing: people less in the public eye, or lives lived beyond formal recognition.”  This was written by Vicky and published on the 25th March. 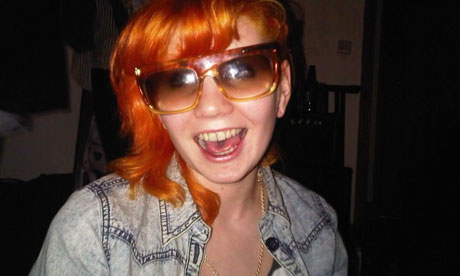 As a photographer in Camden from the age of 14, Louise Cattell covered many bands before they were well known.

Our daughter, Louise Cattell, who has died suddenly, achieved more in her 21 years than many of us do in a lifetime. Born in Oxford, she grew up in London where, as a teenager, she immersed herself in the Camden music scene. She became a photographer who, from the age of 14, covered bands such as the Cribs and the Mystery Jets before they became well known, while simultaneously DJing with her partner Kylie – they were known as Pure Filth – and appearing with the likes of Theo Adams and Roots Manuva. She did all of this while attending Francis Holland school; amazingly she got good GCSEs, three A-levels and made a marvellous Malvolio.

Her other passion was art: she completed a foundation course at the London College of Fashion, and was in the process of applying to art school, having taken two years out to work in the industry. Slogging away at New Look as a visual merchandiser, she nevertheless was an indispensable production assistant during several London Fashion Weeks, where she worked on prestigious shows such as Giles Deacon, Julien Macdonald, Jaeger, Fashion for Relief, Irwin & Jordan, Matthew Williamson and Fashion Fringe. Her teachers recall her coming to school aged 12 with green hair, and being sent home, only to return with a subtle shade of aubergine, which they let her keep. Every day was an occasion to dress up, and the hair was central to this. She was thrilled to get through to the second round of The X Factor – with a very short lilac “do”.

Little Lou, as she was known, had a huge heart and compassion for others: she supported friends through anorexia, agoraphobia, cancer and depression. She was an expert dancer and hula-hooper. At her humanist cremation, as we belted out the words to Cabaret, her photo watched over us: dressed up to the nines, beer in one hand, camera in the other. It was a fitting send-off to someone who never sat alone in her room.

Louise is survived by us and by her brother, Tommy.

4 thoughts on “Other Lives”