When Vicky Unwin’s daughter Louise was found dead in the bath after taking ketamine last March, her world was torn apart. But instead of hiding behind her grief and her anger, she spoke out — launching a campaign to educate others about the dangers of today’s ‘party drug’ of choice.

Louise Cattell, 21, was a recognisable face in east London. Bright, rebellious and creative, she had a different hair colour for every day of the week and rode a pink bicycle covered in fairy lights.

She moved to a flat in Evering Road, Upper Clapton, as the music scene shifted east from Camden, where she grew up. And like many young people in Hackney, Louise and her friends were more than familiar with the mind-altering drug ketamine, also known as K and Special K, or Vitamin K.

Its increasing popularity in east London became clear last November when police seized London’s largest ever stash of the substance in Dalston.

One Monday, Louise dropped off a portfolio of work at Chelsea College of Art where she was hoping to study. The next day, she made her fatal mistake. 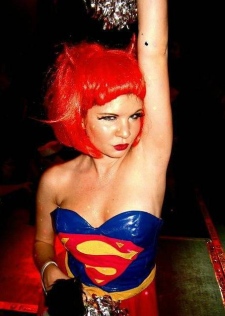 “On Tuesday a friend came over and they were working in Louise’s garden,” Vicky, 53, told the Gazette.

“In the evening a few more friends came for dinner and they had a few beers. It was a very low-key evening.

“At some stage in the evening, they took ketamine.

“Louise wasn’t a habitual user by any means. She just didn’t have the time — if you take ketamine, you can’t really work properly.

“And she had very little money. She had just come back from travelling in Australia and she didn’t have a job.

“Her friend went to bed and Louise had a bath. The girl woke up a while later and realised Louise wasn’t there. She found her in the bath. She tried to save her. But Louise was dead.”

Vicky, a writer and art gallery boss who has worked for the Telegraph Group and Louise’s father Ross, 53, were living in Geneva at the time. But her older brother Tommy, 23, was staying in the family home in Belsize Park.

Two policemen called on March 2 to tell him Louise had been found drowned. And her parents came rushing home.

“It did take a few weeks to piece it all together,” said Vicky. “The grief doesn’t get better. You can only get through the day if you think about the nice memories. Louise lived her life to the full.

“But when I began to find out about ketamine, rather than feeling angry and hating the people that she was involved with, I decided to let people know about it — to stop other meaningless deaths.”

Experts say about 125,000 people in the UK use ketamine, although Vicky believes this is just the “tip of the iceberg”. It is a powerful anaesthetic used on humans and animals — famously as a horse tranquilliser — which found its way on to the rave scene in 1992.

Ketamine can be bought cheaply and injected, snorted or swallowed as a pill to induce euphoria and rushes or waves of energy at low doses. But at higher doses, the class C drug can cause hallucinations and out-of-of-body experiences, often followed by numbness, muscle spasms and vomiting. Users can become psychologically but not physically dependent on it.

Ketamine was officially linked to 23 deaths between 1993 and 2006 and doctors say it is more dangerous when taken with alcohol.

The website set up by Louise’s family has now been read by thousands, with many sending messages of support or their own frightening accounts of ketamine use.”

Louise’s family now want to speak to recovering addicts for a short film to be broadcast on YouTube.

“It’s no good me or anyone else telling young people not to take ketamine. It has to come from their peers,” said Vicky.

“I do not want Louise to be remembered as just some drug fuelled art student because she wasn’t. She was so much better. The fact that she died is one of those once in a million things. It’s so unfair. But she didn’t live in vain — or die in vain. There will be some good that will come out of her pointless and stupid death.”