The rise and dangers of ‘party drug’ ketamine

Louise Cattell vowed to her mother that she would never touch drugs – two years before the 21-year-old fashion student’s narcotics-related death in a flat in Hackney. Olga Craig reports on the alarming rise in popularity of the ‘party drug’ ketamine. 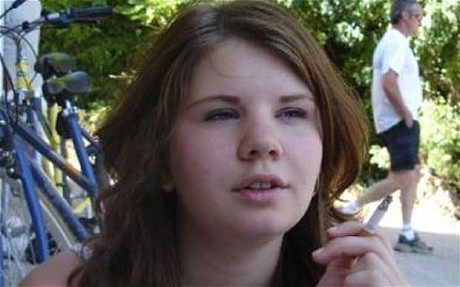 Louise Cattell, who attended Francis Holland School for Girls, possessed a rebellious, bohemian streak, which her friends and family adored about her

“Grief just hits you in waves. No one, I think, apart from a parent who has lost a child, can truly understand the grief of that loss. It’s indescribable. It’s those moments when suddenly you come across something familiar, and then you feel terrible.”

When Vicky Cattell spoke those words in a Radio 4 interview last week, her reason was twofold. Mrs Cattell, understandably, wanted to mourn the loss of her 21-year-old daughter Louise, her bright, bubbly, much cherished younger child. But her overriding reason to talk publicly of her daughter’s demise was much more important: she wanted desperately to highlight the futility of Louise’s death. And, in doing so, urge a generation of youngsters her daughter’s age to shun what has become Britain’s “party drug” of choice: ketamine.

It is little more than two months since Louise, a clever, articulate, bohemian and gregarious young woman – the daughter of solidly middle-class parents who sent both their children to public school – was found dead in the bath after taking ketamine with friends. Louise, known by her family – Vicky, her father Ross, and older brother Tommy, 23 – as Little Lou, had spent the last evening of her life having dinner with four friends. They had drunk wine then taken the drug, which dramatically dulls the senses, before Louise decided to have a bath. In all likelihood, the combination of a small amount of alcohol and huge amount of ketamine, which is also used by vets to tranquillise horses, meant that she lapsed into sleep, slipped below the water and drowned.

For her parents, who were living in Geneva at the time, having left their son at their Belsize Park home in north London and Louise in her own flat in Clapton, east London, the shock of Louise’s death has been overwhelming. “You have this nightmare so many times as a parent that something like this is going to happen,” Mrs Cattell says. “And then you wake up and think, ‘Thank God, it’s not true.’ The problem is that now it actually is true. The worst thing that could happen has happened, and there is not a thing we can do about it.”

The family’s loss is incalculable. The couple’s elegant home is scattered with photographs of their daughter. Louise hula-hooping, wearing a leopard-print mini-dress with a pair of giant sunglasses perched on her nose; Louise pouting in a long, black dress and matching lipstick; Louise with lilac hair while competing in The X Factor.

She attended the prestigious Francis Holland School for Girls in London, and, as a young teenager, she immersed herself in Camden’s music scene. Academically gifted, she achieved top grades in her GCSEs and A-levels. She had just returned from a trip to Australia before she died and was looking forward to studying design at Chelsea College of Art. She possessed a rebellious, bohemian streak – something her friends and family adored about her.

“Louise achieved more in her 21 years than many of us do in a lifetime,” Mrs Cattell says. “Little Lou had a huge heart and compassion for others. She supported friends through anorexia, cancer and depression. Art was her passion. Her teachers recall her coming to school, at 12, with green hair and then being sent home, only to return with a subtle shade of aubergine. Every day was an occasion to dress up. She was thrilled to get through to the second round of The X Factor – with a very short lilac hair-do. She was a bohemian soul. Really, she was a rebel from the age of 14. She once went to school dressed as a Native American. But she got good grades in all her exams. She had just put in her portfolio to go to art college.”

As we sit in the secluded garden of the family home, Louise’s cat, Pickles, strolls by, settling next to a newly planted evergreen. Poignantly the inscription on the pot reads: “In memory of Louise Cattell.”

For the Cattell family, who intend to campaign for more awareness about ketamine, the true tragedy is that Louise’s death was so wholly needless. And has served only to highlight the enormous rise in the drug’s popularity.

In the wake of the ban on party drug mephedrone last April, ketamine has swiftly filled the void. Until the 1990s, ketamine – called K or Special K by users – was generally known only as an anaesthetic. Then it hit the rave scene. Its popularity, in part because it is cheap (£6 for one gram) and readily available, has soared, and it is estimated there are about 125,000 users in the UK. Over the past year, there has been a 68 per cent increase in the volume of calls to Addaction, a drug charity, seeking advice on the drug, and since 1993 it has caused 23 deaths. Yet, because it has a low rating as a Class C drug (ecstasy is Class A, cannabis Class B), naive youngsters wrongly believe it to be relatively safe.

Reclassification, however, is unlikely to combat the drug’s popularity. As Val Curran, professor of psychopharmacology at University College, London, points out, this rarely affects the popularity of a drug among users. “When we ask people what would change their use of drugs, the reasons that come bottom out of 20 are always their parents finding out and the classification of the drug.”

And yet the little-known side-effects of ketamine can be gruesome. “Regular takers often have terrible bladder problems: many have to have their bladder removed. A young person with bladder control problems is hardly a sexy image,” says Prof Curran. Generally bought as a white powder and snorted like cocaine, it affects the major neurotransmitter system in the brain – which is particularly dangerous for those whose brains are still developing.

“It is, however, completely different to LSD,” says Prof Curran. “In large doses, you can have an out-of-body experience and imagine you are looking down on yourself, out of your body – what is known as the K-hole experience. At lower doses, your limbs feel elastic and there is severe memory impairment.

“It’s the regular takers who are the major concern. It has the opposite effect from that of ecstasy. It makes you withdraw socially. In a club, the people on ecstasy will be dancing, but the people on K will be flat on the floor and deep into their own psyche.”

The Cattells, like the majority of parents, had no idea Louise took ketamine. Though she was far from addicted, she had used it regularly. On the morning they were told of her death, Mr Cattell was in the Geneva office of Deloitte, the financial advisers for whom he works.

“I heard the key in the lock and said, ‘Ross, what have you forgotten?’” Mrs Cattell recalls. “When he came up the stairs I just knew something terrible had happened. I thought one of our parents had died. And then he said, ‘It’s Louise. She’s dead.’

“You have to be honest these days. Every single parent knows their child has dabbled in drugs. We all used to smoke pot when we were that age. But drugs have changed. When we were young, they were relatively safe but now they are absolutely lethal.”

As a loving mother, Mrs Cattell had spoken to Louise about drugs. “I did speak to her about ketamine in particular,” she recalls. “It think it was two or three years ago when she was still living at home. I knew it was a really bad drug, but I don’t think she knew much about it at that stage. She said to me, ‘Mum, I’ve seen what crack, coke and heroin can do to people, and I’m not ever going to go down that road.’ I hoped she was just smoking dope and that was it. But, at 21, she was in her own place. And I don’t think you can ever know what your kids are getting up to.”

Louise’s friends were an eclectic group. One, Zac Stephenson, a 35-year-old singer with the band Special Needs, has himself learned the hard way to steer clear of ketamine. “I didn’t use it all that often, but I had some horrendous experiences,” he says. “On small doses, I would feel my spirit was floating in the ether. Once, I went into the K hole. It was horrific. Everything changes in an instant. I was plagued by feelings of mortality and the vastness of the universe. I began having panic attacks. People don’t understand just how dangerous it can be. When I took it, it had a really negative impact on my life.”

The impact on Louise’s life, however, was tragically greater. Her friend found her in the bath, and, though she called the emergency services who talked her through trying to resuscitate Louise, it was too late. Police arrived at the family home at 7.30am to tell her brother Tommy.

Initially, the Cattells had intended to have a small family funeral, but, as more and more friends arrived at their door, each with their own special memories of and accolades to Louise, they decided to have a larger send-off at Golders Green Crematorium for 400 people. The day would be a celebration of Louise’s life.

“There were a lot of familiar faces, everyone wearing their gaudiest and brightest colours,” Mrs Cattell wrote in her diary.

In another excerpt, she wrote: “‘Don’t cry,’ I say sternly to everyone. Somehow we have to hold it together. But suddenly there is a hush and a big black car draws up. I realise it is the hearse… It is unbearable, one of the worst moments ever, to see the wicker coffin bedecked with orchids, tropical leaves, all yellow, gold and green. By chance, two old friends are standing there and each takes a hand as the full impact hits and I collapse.”

Inside, Mrs Cattell recalls thinking: “How wonderful to see how loved Little Lou is.” The family followed Louise’s coffin into the crematorium for a humanist funeral, to the strains of Janis Joplin singing Piece of My Heart. “The boys have blown up a gorgeous photo of Louise in club attire, beer can in one hand, camera in the other, a cheeky look on her face. It is on an easel with a pair of New Look Louboutin-style shoes beside the coffin.

“Then Ross makes a dignified and moving tribute to Louise, not a falter or stutter. How he holds it together I can’t imagine. I haven’t read it in advance, and I am deeply moved by his words. It is only appropriate to follow this with Sweet Child of Mine. And then came probably the most poignant words I will ever hear: ‘Louise will not grow old as we who are left grow old. Age shall not weary her. Nor the years condemn. At the going down of the sun and in the morning, we shall remember her.’

“And then, never thinking I would hear this haunting music in relation to our own darling daughter, Dan and Rainbow play The Last Post. It is heart-breaking. Sobs wrack the gathering, as Oleta Adams softly sings Louise’s favourite song, Get Here, and the coffin glides soundlessly away – and I know it is a cliché – to eternity.”