She had been to the same finishing school as Sienna Miller and Jemima Khan and had a bright future ahead of her.

But Louise Cattell’s life was cut tragically short at 21 when she snorted ketamine and drowned in a bath under its influence.

Her inquest heard yesterday that she had just returned from a trip to Australia and was looking forward to studying design at Chelsea College of Art.

She spent her last evening drinking and taking the drug with her best friend Louisa Harris, 23, and three young men in her East London flat.

Restless after going to bed, she took a bath and Miss Harris found her dead body floating in the water several hours later.

Miss Harris, who is being prosecuted for possessing ketamine, told the inquest her friend had taken a break from drugs while in Sydney and Melbourne – a 21st birthday trip paid for by her parents.

‘I think that was what her mistake would have been, because her tolerance may have dropped, she said.
Police officers who were called to the flat on March 2 found evidence of drug abuse, including more ketamine, white powder and scales. Miss Harris refused to tell officers who had supplied the drug, saying: ‘I don’t want to get anybody in trouble.’

A pathologist found the amount of ketamine taken by Miss Cattell could have caused her death, but she appeared to have passed out in the bath and drowned.

The popularity of the drug, which is used by vets as a horse tranquilliser, has soared in the wake of the ban on mephedrone last April. It is estimated that up to 125,000 take it because it is easily available and often cheaper than alcohol, with one gram costing just £6.

Addaction, a drugs charity, reports a 68 per cent annual increase in inquiries about ketamine, which is also known as K, or Special K.

It is rated a class C drug but a review is expected to recommend it be upgraded after being linked to 23 deaths since 1993. Ecstasy is in Class A and cannabis in Class B. 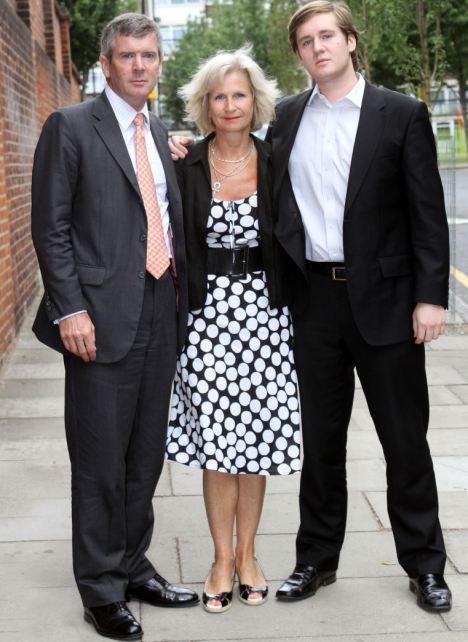 Bereaved: Louise's parents and her brother Tommy outside court after they attended the inquest into her death today

The couple have launched a campaign on YouTube and MySpace to raise awareness of the drug and are planning a memorial concert.

Mrs Unwin, 53, fought back tears as she described how her daughter had been celebrating ‘getting her act together’ before her death.

She had helped organise London Fashion Week and once made it to the second round of the X Factor.

Mr Cattell, 53, a partner at financial services firm Deloitte in Geneva, revealed the family were taunted on the internet by ketamine users who said their daughter ‘did not know how to take it’.

At the inquest – in Poplar, East London – coroner Selena Lynch returned a verdict of death by non-dependent abuse of drugs.

Maryon Stewart, who lost a daughter to the party drug GBL, said: ‘This is another incident of somebody taking a party drug, believing that it is relatively safe and that nothing will happen to her.

‘It highlights how these substances are a totally unknown quantity.’